Great Northern support for young footballers on our line in conjunction with Pro:Direct Academy. 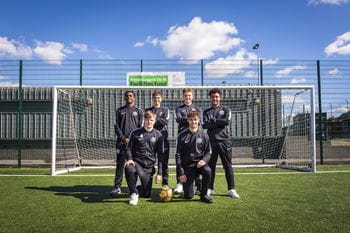 The young men, from Bedfordshire and Hertfordshire, were struggling to afford the daily travel needed for their BTEC in Sports at the Lee Valley Pro:Direct Academy in north London. We pleased to be able to help out.

Danny Payne, the Academy’s Head of Coaching, said: “Without this free travel support from Great Northern the lads would not be able to be a part of the Pro:Direct Academy. They now have the chance to chase their football dream while carrying on their academic studies, which we hope will give them great options and great potential when they finish their two years with us. We can’t thank Great Northern enough.”

The soccer students are RJ Smith-Jones (aged 17 and already a Bermuda U20 international) who travels to the Academy from Luton, Tommy Reynolds (16) and Jack Thomas (18), both from Stevenage, Harvey Moss (16) from Knebworth, Ricardo Green (17) from Hitchin, and Sam Willis (18) from Sandy.

Past Academy graduates who enjoyed the travel support during their studies include Jack Morrell, who went on to sign for League One club Gillingham, and Harry Draper, now with League Two side Stevenage.

We believe in doing business in a responsible way – serving our passengers and benefiting the communities around our stations.

Take a look at the many ways we do this