Pull on your trainers, hop on the train and head to King’s Lynn to explore the salt marshes and sand dunes of the North Norfolk coastline with Lunges & Lycra.

From Couch to 5k, to marathons or weekly parkruns, running is one of the most popular sports in the UK. Around seven million Brits run at least twice a month according to Sport England and a record breaking 414,618 people applied for a place in this year’s London Marathon.

It seems we’re a nation who love lacing up. And Emma and I are no different. Running is one of our favourite ways to get active. Between us we’ve run marathons and half marathons across the world, we’ve tackled a 53-mile ultra marathon (never again!), we even met at a running club.

The thing we really love though, is jumping on a Great Northern train, hitting the trails and transforming our regular run into a mini adventure.

What is trail running?

Trail running is running that’s done off road, so on dirt tracks, coastal paths, up mountains, through fields and forests – even the beaten track around your local park counts. If your regular plod around the local pavements is getting a bit monotonous it’s a brilliant way to get your running mojo back and explore.

When you’re surrounded by nature and amazing scenery you forget about the effort of running, forget about the stresses of work and just enjoy. Trail running is generally easier on the joints than running on tarmac, you don’t need to worry about your pace because it’s impossible to predict what the terrain’s going to throw at you next and, if you want, you get to jump in mud! When Great Northern asked us to write about active things to do along the line we knew we wanted to find somewhere new and wild to run. We chose the Peddars Way and Norfolk Coast Path, one of 15 national walking trails in the UK.

The Coastal Path part of it starts in the seaside resort of Hunstanton in North Norfolk and stretches for 84 miles through sand dunes and salt marshes to the village of Hopton on Sea, passing through the coastal towns of Wells Next the Sea and Cromer. One of the big advantages of choosing national trails is that they are signposted so it’s almost impossible to get lost, a bonus for us!

We made our base in the historic market town of King’s Lynn for a weekend, the last stop on the Great Northern line. It’s the perfect spot for exploring the more remote areas of Norfolk as regular bus services take you from the town all the way along the coast. There we booked a boutique hotel, Goldings, so we could head out to the trails for two days and have a lovely bath and some nice food and vino when we got back, it makes you hungry all that fresh air. 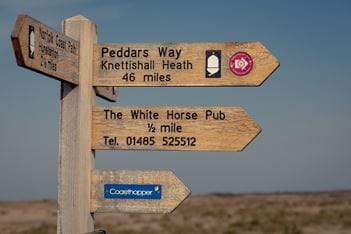 Hunstanton is a typical small faded British seaside town – amusement arcades, sweet shops, bingo halls and fish and chips. The trail starts at the pier and you follow it past the green space of the Esplanade Gardens to the smaller resort of Old Hunstanton. It’s here where you realise just what a beautiful part of the country this is.

Hunstanton is known as Sunny Hunny for its amazing sunsets – it’s one of the few places on the east coast where the sun sets over the sea – and the sandy beaches stretch for miles. At Old Hunstanton you encounter the cliffs the area is famous for – different colours of rock mean they’re striped red and white.

The trail passes along the cliff top but the tide was out so we ran on the hard-packed sand of the beach below to get a better view of the colours and the cliff-top lighthouse. The beach is also strewn with large round boulders that reach out into the sea, it’s impossible not to stand on them and take photos.

As we rejoined the trail after the cliffs we ran past dozens of ice-cream coloured beach huts hidden by sand dunes and bleached out grasses, it was the seaside just as you want it to be.

From here the trail heads through the salt marshes and past pine woods where regular signs tell you about the local wildlife and what to look out for – natterjack toads, butterflies, dragonflies and various migrating birds all make this area their home. In fact if you’re a bird watcher you’re spoilt for choice, there’s an RSPB area known as Titchwell Marsh where you can spot avocets, marsh harriers, bearded tits and bitterns as well as plenty of twitchers huddled round huge telescopes covered in camouflage. Suitable for all runners

The beauty of the Norfolk Coast Path is that you can make your run as long or short as you want it to be as the coastal bus passes through the villages and towns that back on to it, ready to whisk you back to King’s Lynn. It’s perfect for those new to trail running too as you’re running on sand, packed trail and occasionally wooden boardwalk so if you don’t have specialist trail running shoes for tackling rugged or slippy terrain, normal road running shoes should be fine. And it’s mainly flat, although those sand dunes do take it out of you.

While we would have loved to run for hours through the marshes by the sea, I was recovering from an injury so needed to keep it relatively short. We left the trail around four miles in at the village of Thornham by the RSPB nature research. Here we happened to discover Norfolk’s Dining Pub of the year, The Orange Tree and ‘accidentally’ missed three buses back to King’s Lynn – well, we had done 25,000 steps by then, we needed a sit down.

The next day we came back and did it all again, only with an added cake stop this time. What else are holidays for? 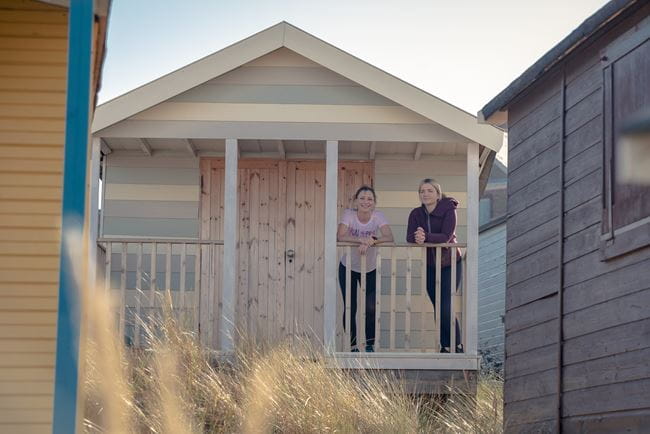 Charlotte Thomas
Charlotte is a freelance journalist, copywriter and editor specialising in health, fitness and lifestyle. An LIRF run leader and qualified exercise to music instructor, her main passion is running. She’s currently in training for Manchester marathon 2019.

Emma Lax
Emma is a Strategy Director at a sports marketing agency based in London. She is also a qualified personal trainer and level one swim assistant. She’s currently training for her first half ironman distance triathlon – the Cotswolds 113 in June 2019.

Find out more about the people who travel our network