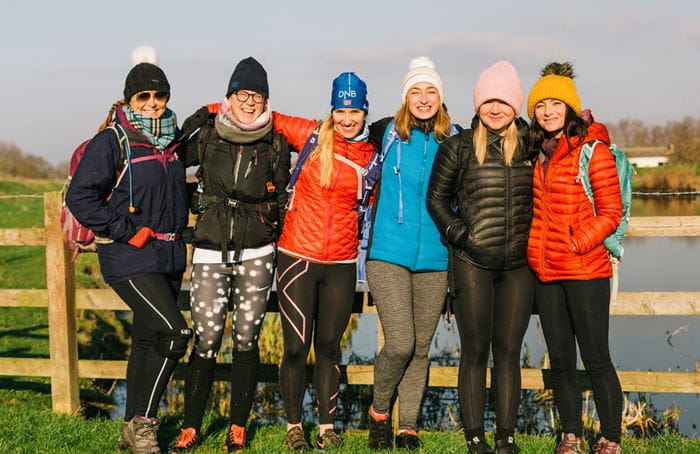 It’s funny, isn’t it, how your idea of a good weekend changes over time? Not so long ago if you’d asked us to describe our ultimate girls trip, tequila shots, dancing and novelty wigs would have featured pretty heavily. Fast-forward to 2019, however, and we’re all about the mud, countryside and a big old dose of healthy activity. Living in the city in a life constantly interrupted by emails, social media, deadlines, and general busyness, we crave space to walk, to think, to chat and to just be. Which is why, when Great Northern asked us to highlight some of the ways you could enjoy being active along the line, we immediately started searching for new, remote places to escape and explore.

Our research led us to the Fen Rivers Way, a 50-mile walk following the rivers Cam and Ouse all the way from Cambridge through the wide, open spaces of the Fens and on to the ancient town of King’s Lynn in Norfolk. It sounded like the perfect mix of challenge and relaxation. So, on a crisp and sunny February weekend, we grabbed some mates, jumped on the fast train to Cambridge from London’s King’s Cross, and set off on an epic hike.

Making the walk work for you 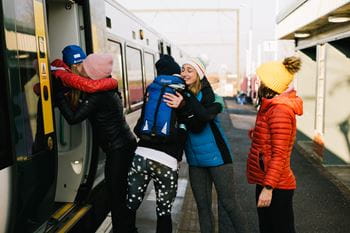 As we only had a weekend to complete the walk – and the winter days were short – we knew we wouldn’t have time to get all the way from Cambridge to King’s Lynn. The beauty of the Fen Rivers Way though is that it pretty much follows the Great Northern train route between the two cities, so you can plan to jump on at different stations if you want a shorter walk.

We decided to hike the 18 miles from Cambridge to the small cathedral city of Ely on the first day and then on to Downham Market, in the neighbouring county of Norfolk, on the second. You can start the walk, as we did, from Cambridge station and walk through the city to join the river at Midsummer Common or, if you want to start on the river itself, Cambridge North station is right by the Cam. This information proved pretty useful when one of our group missed the train from London (mentioning no names) and had to catch the next one, arriving at Cambridge North at pretty much the exact time we did on foot.

As you leave Cambridge the river path is gravelled and even, making for easy walking. University rowing teams whizz past on the water, swans float by, the gardens of beautiful stone cottages reach all the way down to the river (and everyone seems to have a boat at the bottom of their garden). It all feels very English.

Gradually though, things become quieter. After you pass Waterbeach railway station the houses and villages become less frequent, the brightly painted narrow boats thin out, dog walkers are a rare spot and the path becomes a grassy trail along the flood bank. Before you realise it, there’s just you, the birds and the river.

The East Anglian Fens are famed for huge skies, open space and being pretty much completely flat. And it’s true, the sky here seems so much bigger than it does in the city. The flat ground means the countryside stretches out forever and there’s a pervading sense of quietness. As a group of six we naturally split into smaller groups, sometimes walking in pairs and talking, sometimes walking solo with our thoughts and sometimes taking photos on the dramatic bridges that occasionally break up the landscape.

Make sure you pack snacks

The only thing we had to think about that day, apart from walking and looking out for the Fen Rivers Way markers was stopping for lunch. Erm, we failed. As there are two sides to a river there are two different Fen Rivers Way paths, the East and the West. We chose the West as it’s better maintained, easier to follow and is the same side as the train stations. Foolishly, we didn’t think about which side of the river the pub we planned to stop for lunch was on. 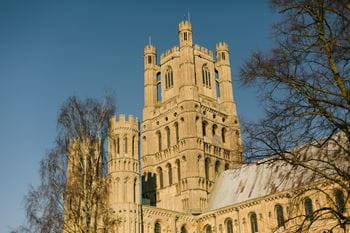 Yep, you’ve guessed it. Other side of the river, no bridge for miles. According to Google maps to reach the pub in the hamlet of Upware was going to take us one hour and nine minutes. With Ely only around seven miles away we reluctantly ignored those steaming bowls of chips beckoning across the glistening water and pushed on.

It’s worth pointing out here that one of the things that makes the Fen Rivers Way so enjoyable, the absence of hustle and bustle, is also something you should prepare for. For many miles there won’t be any shops, cafes or handy ice cream vans to buy snacks and drinks (two fisherman laughed at us for quite a while when we asked if there was anywhere to get a sandwich) so make sure you carry everything you’re going to need. 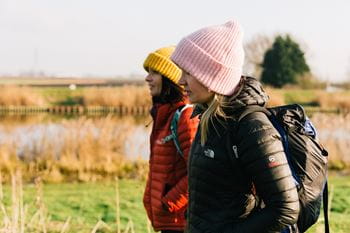 Around five miles before you get to the tiny city of Ely you’ll start to notice its cathedral on the horizon. From a distance it doesn’t look that impressive but as we reached the city and climbed the hill towards the centre – the first hill we’d seen all day – it’s fair to say we had a ‘Wow’ moment.

The cathedral, which dates back to the 11th century, has huge glass windows and a gothic glass octagon on the roof giving the whole building the impression of light, space and air. It’s definitely worth going inside to see the painted ceilings and witness the octagon from below too. While we did pop in for a look around, this had to wait until the next day, after more than 51,000 steps we had a pizza to inhale first. 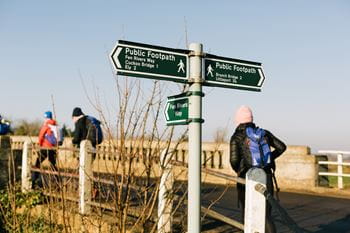 After spending the night in a hotel in Ely we woke to a crisp and sunny day, perfect walking weather. Heading back down to the river we passed the busy Ely riverside where there are plenty of tempting bars and restaurants to enjoy a glass of wine in the sun – it being before noon we didn’t partake.

The path here is gravelled and full of people heading out for a walk and watching the boats. It soon gets quiet again though, particularly when the Fens Rivers Way takes a strange little detour through an industrial estate. We thought we’d taken a wrong turn until we emerged from a car park to a little wooden bridge called Cuckoo Bridge, which took us over the Roswell Pits nature reserve. A series of clay pits flooded to form lakes and reed beds, cuckoos, kingfishers, reed warblers and dragonflies are all common here. 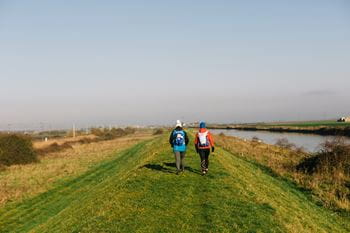 The route then heads towards Littleport – the largest village in Cambridgeshire.

We had planned to walk on to the next train station in Downham Market but, as we’d spent longer looking round Ely than expected we realised we wouldn’t have enough time to get there before dark. Instead we followed the path for a further couple of miles and then turned around and walked back to Littleport where we caught the train direct to London. Feeling tired, happy and full of fresh air we spent the journey planning when we were coming back to finish the Fen Rivers Way – Littleport to King’s Lynn, we’re coming for you.

Charlotte Thomas
Charlotte is a freelance journalist, copywriter and editor specialising in health, fitness and lifestyle. An LIRF run leader and qualified exercise to music instructor, her main passion is running. She’s currently in training for Manchester marathon 2019.

Emma Lax
Emma is a Strategy Director at a sports marketing agency based in London. She is also a qualified personal trainer and level one swim assistant. She’s currently training for her first half ironman distance triathlon – the Cotswolds 113 in June 2019.

Find out more about the people who travel our network